“I’m not sure what was more intense, shooting in the rain without camera protection or getting tight with a 50mm prime.”

On a recent trip to Laos, I found myself trying to save a few dollars at the Bangkok airport by booking my flight to Luang Prabang with a stop in Chiang Mai.  If you’ve been to Chiang Mai you will probably have visited the Tiger Kingdom, the Street Markets (day and night), numerous Wats, or maybe the Long Neck Village or similar hill tribes.  I had seen the latter on a trip through several years earlier, but hadn’t yet made it to see the cats at Tiger Kingdom.

I only had a day in Chiang Mai, so from a photographic standpoint my options were a bit limited for planning and timing my visit.  Straight from the airport, I dropped my bag at my hotel (BanThai Village – one of my favorite boutique hotels ever visited) and took the same airport taxi directly to the Kingdom.  Not exactly the cheapest way to get there, but it was quick and easy.  If on a budget, consider taking the public transportation or renting a motor bike for the day.  On arrival, it was overcast and lightly raining.  The light was nice and soft, but this also made it a bit more challenging to capture action shots.  The images below were all captured with a 50mm 1.4 and NIKON D600. 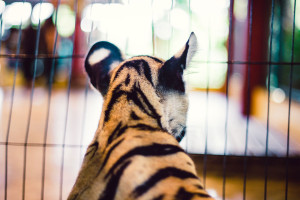 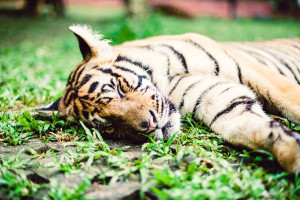 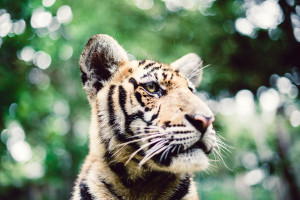 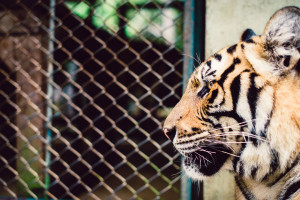 The Tiger Kingdom is located a short drive away from city center, in the Mae Rim just north of Chiang Mai.  The facility houses about 40 or so cats of various ages and sizes, commonly referred to as New Born, Smallest, Medium, and Big due to their different ages.  Once you arrive, there are a couple of ways to watch them lounge or play with one another.  One option is to grab a bite to eat at a centrally located restaurant, where at no admission charge you can view the grounds.  However, most will opt for a guided visit of the different enclosures in order to interact up close with the cats.

Given I was interested in capturing as many photos as possible, I booked the largest (and most expensive at about $50US) package including a visit to all of the ensclosures.  I was very happy I did, as it allowed me to interact with cats of various size and age – and more interestingly personality.  If you are on a budget, I would recommend visiting the Medium sized tigers, as they tended to be more active and were large enough for you to easily witness the differences between them and playful house cats you might have more experience with.  If you are after a photo to show your friends and family, of course pick up the Big cats option.

Photography TIP:  I don’t suggest carrying a large camera bag with a lot of gear, as it’s not allowed with you inside the enclosures for the tiger’s safety.  The grounds do have video surveillance and my gear left safely with me at the end of the day – though who wants to worry about their camera gear during such a unique experience.

It’s hard to describe the feeling of watching these cats wrestle or hearing them purr.  Witnessing the size of their paws and their lean muscle as they move is also amazing.  From a photographic standpoint, I’m not sure what was more intense, shooting in the rain with no camera protection or getting tight with a 50mm prime.  Regardless, being there in person makes all the difference in the world.

A couple of thoughts about responsible travel… at first I was concerned about seeing animals in captivity – I had a sense that supporting tourism of that type might exploit local animals through incentivising the domestication and possible medicating of animals to lour tourists for a few dollars.  Before my second visit to Chiang Mai, several other travelers advised me this was not the case at Tiger Kingdom.  In my limited experience there, all the animals were treated respectfully and appeared alert and well taken care of.

I should probably also mention that it is not recommended to approach a grown tiger from the front, as they may mistake your intentions as aggressive or playful.  Tigers up to 200 kg have powerful paws and sharp claws which could pose a very real danger.  For this reason, a professional trainer was at my side throughout the entire experience.

I have to give BanThai Village another plug… check out my review on TripAdvisor.

Gear:
I experimented on this trip by leaving the Nikon lens trio behind.  I packed the D600, 24-70 2.8 and 50mm 1.4.  Now, I did recognize the 50mm prime was redundant with the 24-70mm, but I wanted the option of shooting wide open with some ultra fast glass and was hoping to work on my street portraits.   As usual I carried filters, cleaning supplies, flashlight, spare batteries, etc.  I went carry on only, with a small indestructible carry on case by Victorinox with travel essentials and the remainder of my camera gear in a ThinkTank Retrospective bag.